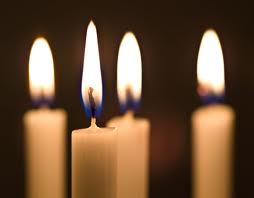 About 3 years ago our minister at the time, Andrew, introduced us to a lovely Advent liturgy. I don’t know where he found it, as I can’t find it anywhere on the net; but it continues to inspire me each Advent (the last 2 years I had it stuck on my kitchen cupboard).

I believe in the promise of Christmas
and the importance of celebrating it in Church.

I believe in the God at the centre of Christmas,
whose hope for the world was imagined by the prophets.

I believe in Mary,
who sang of turning the world upside down
and who allowed her life to be disrupted by God.

I believe in Joseph whose broken heart
broke the rules to do the right thing.

I believe in the smell of the stable
I believe there is no place where God will not go.

I believe in the shepherds,
those simple ones open to hear the Angel’s song.

I believe in the Magi,
the ones outside the faith,
outside the community,
who searched out the Holy.

I believe in Jesus,
born in poverty,
soon a refugee,
raised in faith,

who lived seeking justice,
died speaking forgiveness
and rose with a love that could not be stopped.

I commit to use this season to seek out the Holy
both in God among us and in God beyond us.

I open myself to an Advent journey of great joy
that will change my life.

This Advent I have been thinking about how unlikely the Christmas story is. It’s probably occurred to you ages ago, but sometimes it takes me ages to catch on. Perhaps it’s because we are brought up with the Christmas story from primary school in constant nativity retellings (angels with sparkly tinsel: tick, shepherds with tea-towel headgear: tick, wise men with lots of bling: tick) but we just swallow the whole thing sometimes without really thinking about how mad it was.  But why the shepherds? Why a stinky stable for God’s son’s birth? Why the Wise Men? Why was the Son of God’s mother put through such indignity, anxiety and discomfort? One of the things that helps me when I have a massive doubt attack (which can be frequent) is this story – I mean if humans were going to concoct a story about how the Son of God came into the world I don’t think they’d have come up this this version; they’d have come up with a much more plausible one.

However when you think about all these unlikely elements of the Christmas story – and the liturgy above helps us get into that – it tells us a lot about God’s character and his priorities. And it makes me think about how my priorities can be very different to God’s priorities. It’s all very humbling.

One thought on “Advent: 17th December”